From time to time here, we discuss the importance and values of camp for children and teens.
Today, we’ll highlight some of the many benefits for counselors. 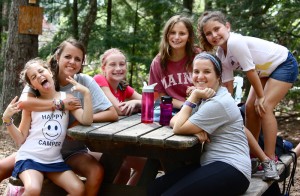 Last spring, New York Times’ “Adventures in Parenting” blogger Dan Fleshler wrote about his daughter’s decision to spend another summer working at an overnight camp. She resisted “considerable pressure to join the throngs of anxious fellow collegians…who pad their resumes with summer internships in corporations, charities, law firms and other employers that, according to conventional wisdom, offer better preparation for the brutal economy than a summer camp.” Dan thought that was true too.
He told her, “anyone can be a camp counselor.” He wanted her to be more than“just anyone.”
But, he admitted, he also agreed with his wife. She said their daughter would have “plenty of time for the so-called real world.” More convincing was the young woman herself. She argued that fetching coffee in an office pales in comparison to days and nights spent “nurturing, teaching, organizing, comforting and inspiring.”
She described how, the previous summer, she’d helped a camper cope with a myriad of “real life” issues. She’d comforted children whose parents were separating, and aided others who were dealing with anxiety.
She taught waterskiing to campers, instilling confidence they will have the rest of their lives. “What’s more important than that?” she asked her father.
“I had no answer, because I couldn’t come up with anything more important,” he wrote. Nor could he refute her argument that managing group projects, motivating individuals, setting goals, juggling tight schedules, and being available 24 hours a day, seven days a week, was “incomparable preparation” for the future.

Dan Fleshler’s daughter was lucky enough to work as a camp counselor. Less fortunate college students had to settle for internships.