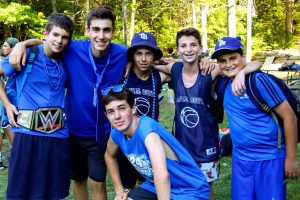 We all knew Spirit Days was going to break soon. We had so many campers guessing. Would it be Wednesday morning at breakfast? Thursday morning? Everyone had their theory. But what no one could have guessed was that, at Tuesday’s Evening Cove, CIT Matty G would engage Roger in a seemingly innocent conversation about fishing that would serve as a distraction for the CIT’s to break Spirit Days at Cove. That’s right…Spirit Days 2016 broke at Evening Cove, and what an amazing two days we had!!!

The Blue Jedi and the Green Wizards squared off in the friendliest of competitions. From the ballfields to the waterfront, the sounds of games, cheering, singing and team pride was evident throughout. Our amazing group of CIT’s ran one of the closest KAOS races in history, and the Moosehead Relay was even closer! The songs, cheers and plaques were awesome. And, when Adam read out the final scores, the winner was… Laurel South, because at the end, we had a blast competing with each other and we were so glad to reunite as one Laurel South family. Closing Ceremonies concluded with an incredible fireworks display, and we went to bed exhausted but happy. 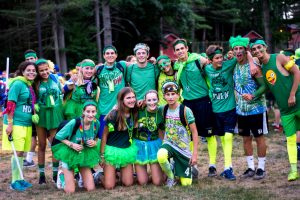 This morning, the 5 Year Club headed out on their annual trip, Intercamp games and Tournaments resume and camp is back to regular program. Tomorrow is our Beach Resort “S” Day! On Sunday, our 8th Graders depart for North Conway. Tuesday is Moose Bowl. As you can see, every day is packed to the brim with activity.

As always, it’s a beautiful day on the state of Maine!!!