“Healthy Competition” is a term that is often used at summer camp.  While they also offer a wide selection of niche and hobby type activities, traditional summer camps focus heavily on sports.  The emphasis, however, is more about encouraging campers to be active and improve their skills.  This is not to say that campers do not participate in sports matches.  In fact, many camps not only facilitate game play through intra camp leagues, but inter camp leagues as well.  Thus, “healthy competition”, as it is used at camp, is an expression to describe contests with positive encouragement, regardless of the outcome, and not merely a synonym for “no competition.”

Po Bronson, co-author of Top Dog: The Science of Winning and Losing believes that the camaraderie that results fromh healthy team competition encourages children to learn at a faster pace and alleviates the stress of learning a new skill or attempting to improve existing abilities on one’s own.  Another aspect of camp competition that makes it healthy competition is that it’s limited in scope and time.  It takes place only as long as camp lasts and does not extend beyond the camp environment.  This, according to Bronson, is a key element of “healthy competition, “In finite games, you compete and then you let it go, and you have rest and recuperation – that’s actually really important for kids,” said Bronson. “It’s the continuous sense of pressure that is unhealthy for them.”

The stress of not making a team or of underperforming is not a pervading force in camp athletics.  Says Bronson, “What kids do need to 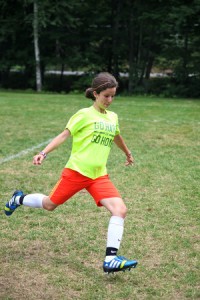 learn is losing is not that big a deal. They need to learn to lose and go ‘Oh, whatever,’ and move on and keep playing…You want to get them to turn up the work ethic in order to win.”  At camp, losing is not a big deal, because every summer is a new summer–new tryouts, new teams, and new possibilities.  The constant rearrangement of groups also helps campers shrug off losses.  Another day brings another activity and a new group with which to compete.  A loss in one activity does not translate to a closely monitored record that eventually defines a team and, sometimes, individuals.  The teams are constantly changing and so are the competitions.

The break between summers also makes growth measurable for campers.  When children constantly train and participate in a sport, it’s more difficultfor them to see themselves improving, even when they are.  The ten month gap from one summer to the next provides campers with the time and distance necessary for improvements to be noticeable.  The distinct parameters of camp that restrict it to a single season—summer—also remove the constant pressure of advancing skills as quickly as possible so as to always be able to perform at peak level.  Every summer is a new summer–new tryouts, new teams, and new possibilities.  As a result, campers tend to maintain a healthy attitude about camp sports, which makes them naturally receptive to the idea of genuinely healthy competition.  At camp, it’s not so much about winning and losing as setting goals and measuring one’s progress from summer to summer.