Much has been made recently about the meals that our children consume in places such as school cafeterias and summer camps.  A general sentiment that these types of establishments place cost and convenience over nutrition and well being seems to be developing.  In the world of summer camp, this couldn’t be further from the truth.  In fact, so dedicated are some summer camps to providing meals and snacks that combat bad eating habits that we’ve decided to dedicate an entire series of blogs to summer camp menus.  In this first blog, we’ll introduce you to the basic concept of camp nutrition and menu compilation.  In future blogs, we’ll discuss special diet, snacks, and the strategy behind the compilation of camp menus.

Most reputable camps offer a deliberate, carefully planned menu to campers and staff alike.  Many camps employ the assistance of nutritionists when planning menus and select food

based on the heightened physical activity of campers during the summer.  All of America’s Finest Summer Camps, for instance, offer extensive yogurt and fruit bars at breakfast as well as salad bars at lunch and dinner.  At breakfast, several different kinds of yogurt are available as well as fruit such as oranges and bananas.  Hard boiled eggs, bagels, and cheese are also typically available.  For those with lactose intolerance, lactose free as well as soy milk are often on hand.  At lunch and dinner, salad bars offer everything from basic staples like tomatoes, mushrooms, peppers, olives, cucumbers, and carrots to more progressive offerings like garbanzo beans, tuna, and marinated vegetable combinations, along with several dressings from which to complete the dish.  Almost all camps offer vegetarian selections at mealtimes.

Planning camp menus is a special challenge for camp directors.  With so many campers and staff dining at each meal, it’s impossible to please everyone all the time.  However, there are other considerations when planning menus.  Children are very active at camp—often considerably more active than they are at home.   Physical activity begins in the morning and often continues into the evening.  Many camp menus have been criticized for being heavy in carbohydrates.  However, there is a nutritional basis in this.  Diets heavy in carbohydrates are recommended for children who engage in heavy physical activity, as carbohydrates convert to sugar very quickly and help replenish energy.  While it’s true that many camp foods are high in carbohydrates, it’s also important to consider that such a diet at camp is also responsibly balanced by ample servings of fruits, vegetables, and proteins. 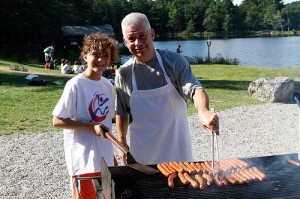 Food allergies are also a prevalent consideration when planning camp menus.  Nut allergies are the most common, although there are many others.  Since food allergies tend to reveal themselves through various levels of sensitivity, it’s not only important to consider what campers and staff might consume when planning menus, but with whom and what they might come into contact during the course of a summer camp meal.

The preparation of food, particularly food that is fried, is another key target of critics.  The fact is that even though many camps offer such traditionally “fried” fare as hamburgers, french fries, and cheese sticks, many of these foods, when prepared at camp, are not fried.  Hamburgers are often grilled while fries and cheese sticks are typically baked to minimize the use of fatty oils.

In case you have ever suspected that your child’s nutrition takes a back seat to fun at summer camp, we hope this brief introduction has helped put your mind at ease.  And if you’re still not convinced, we invite you to continue visiting this blog as we continue our series about camp menus.