It’s January.  The kids just returned to school after their winter break, from which you’re still exhausted.  You’re already thinking about summer.  Entertaining them for two weeks was hard enough, let alone two months!  Maybe it’s time to start thinking about summer camp.  Yes, it’s January.  Yes, this is the time of the year when most of us start monitoring the morning radio and news reports for school closings and delays.  But summer is closer than you might think and now is the ideal time to start choosing a camp.

Summer camps come in many sizes and lengths from around one hundred campers all the way up to several hundred and sessions that last a from a few weeks up to seven.  There is truly a summer camp for every preference and budget.  No matter what type of summer camp you prefer, they all have one thing in common:  the fun doesn’t stop after 5pm!

otherwise be at school.  It’s a place that entertains them well into the evening hours as well.  In fact some of the best times at camp happen after dinner.  Sure there is plenty for campers to do during the day; play sports, pursue a hobby, swim, boat, play games, make new friends.  But the evening is when some of the deepest bonding moments of the summer take place.  After dinner at summer camp, children don’t retire to the living room sofa to watch television or flip on the Wii.  There are no cell phones in which to engage themselves for hours playing Angry Birds.  At camp, campers may find themselves taking part in a sing along, acting in a camp show, playing crazy games, or watching a magician or hypnotist.  It could be drum circle night or there may even be a campfire with s’mores in store.  Maybe it’s a swim or a dance party…or both!  It could be a sleepover or a night making special treats or craft projects.  Maybe it’s just a night to chill with the bunk cabin  No matter what the activity, it’s fun and two words that are NEVER heard at camp: “I’m bored!” 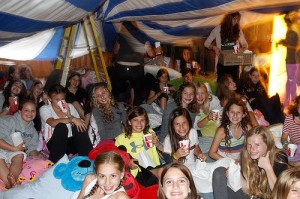 Much of the support for summer camp revolves around the skills children develop during daytime programming activities.  The value in summer camp evening activities is often underrated.  However, a great deal of planning intended to extend camp spirit and tradition into evenings.  Camps employ entire teams of people whose sole responsibility is to plan and execute evening activities and special events that enhance the overall camp experience.  While having fun at their evening activities, campers also continue to learn how to shine as an individual, to be part of a team, and to develop their creativity in ways that benefit them as well as others.  At the same time, some of the most prevalent and pervading summer camp memories are made at evening activities.