A lot is made of sports at summer camp, but most summer camps also offer many programs in the arts.  Dance is one such program that is becoming increasingly popular among both boys and girls.  Like the many sports available to try, summer camp dance programs give campers the opportunity to experiment with several different dance styles.  Aside from the traditional jazz, instruction is often available in contemporary, modern, hip hop, and ballet.  In addition to offering instruction in multiple styles of dance, many camps also form competitive dance teams that, like sports teams, travel to other camps to compete in dance competitions throughout the summer.  Even if campers aren’t quite ready to audition for So You Think You Can Dance, being a member of a camp dance team is still well within reach.  Typically, because summer camp staff work hard to make their camps a safe environment for children to feel encouraged to step out of their comfort zones and try new things, more emphasis is placed on interest than ability.  Many camps create teams for beginners as well as the more experienced.  Summer camp dance teams are also the reason many campers find their camp dance programs a great way to pursue a non sports related interest yet still be competitive. provide an outlet to still be physically active in a creative environment. Summer camp is about letting go and not being afraid to act a little bit silly.  Dance provides the same disciplinary and physical training as traditional sports yet also gives campers the opportunity to express themselves and sometimes even be a tad goofy through artistic choreography.  Dance instruction is often provided by trained dance instructors or college students who compete on their university dance team or are pursuing a career in the field of dance.  The availability of instruction in popular forms of dance such as hip hop has also driven the popularity of dance. 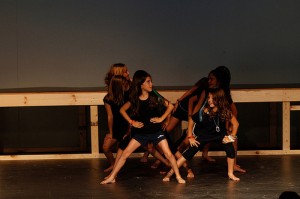 Dance is also versatile. Even though not every camper has a desire to be competitive in dance, campers enjoy learning new moves in dance class and then using them to choreograph bunk or cabin dance numbers for camp shows or talent contests.  They also like showing off their moves on the dance floor during camp dances. Having the opportunity to practice new dance moves in an open, accepting environment such as summer camp gives campers the confidence to continue learning, practicing, and trying what they’ve learned at home.