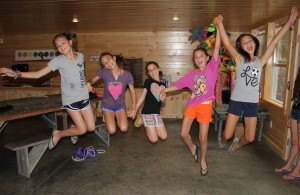 As the digital age in which we live seems to be accelerating, it’s easy to dismiss traditions that are not technology focused, such as summer camp. There is an argument to be made, however, for why summer camp is more important than ever for that very reason. There is a lot to be said for effort. While technology has done much to simplify our lives and make life more efficient than ever, it requires less and less effort from users. Increasingly, people are shying away from tasks that can’t be accomplished within a few keystrokes. Effort, however, not only requires certain qualities, it facilitates them as well. Effort requires energy. Energy, by definition, is the mental or physical strength that allows individuals to accomplish goals. Without physical or mental strength, energy cannot be generated. Without energy, there cannot be effort. Without effort, goals cannot be achieved. There are several very strong keywords to success linked together in those few sentences: effort, energy, strength, goals, accomplishment. At the very least, there is an implied relationship in the linking of these words. In such a sense, using technology to “accomplish” goals is merely a façade. In essence, users are not “accomplishing” anything. They’re merely led through a series of tasks to something that has already been completed for them in order to make their lives easier.

In “unplugging,” summer camp essentially provides campers with the opportunity to control the outcome of their summer by requiring legitimate effort to accomplish goals. Perfecting a tennis serve cannot be done with a few clicks of a mouse. Pressing the “Return” key won’t finish a ceramics project. Communicating with friends is more than logging into an Instagram account. Campers must engage in their camp environment.

When given a challenge at summer camp, they can’t simply skip to the head of the class by typing a search into Google. They must apply their knowledge to come up with a solution. When solving a problem involves more than one camper, they must communicate in order to ultimately come to a consensus about which solution is the best and why. In short, they must apply themselves. Application of oneself not only requires, effort, energy, and strength, it generates them. Campers see firsthand the rewards of hard work. They not only learn how to legitimately achieve goals but to set them as well. They gain a better understanding of the reality of achievement. It requires work, a sharp mind, and the ability to communicate—lifelong skills that form the foundation for success. Beyond the mental agility that children gain from summer camp, there is the literal aspect of activity. Children move around at camp…all day. It’s very easy in a technology laden world, where so many aspects of daily life have become virtual, to be complacent. The human body naturally preserves energy whenever possible. Summer camp showcases the payoff of physical effort on a daily basis by producing tangible results of campers’ efforts through sports instruction and competition as well as hobby programs. Camper self-confidence grows as the products of effort are realized.

Summer camp is not merely a break from technology for campers. It’s a reminder that life is best realized outside of technology. 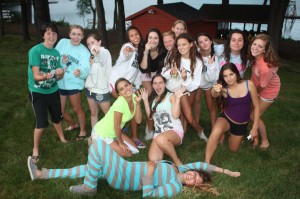 “No” is a word that children hear a lot. No talking in the classroom. No running in the hallways. No playing ball in the house. No to anything that gets clothes dirty. No. No. No. With this in mind, it’s no wonder that “yes” is one of the many reasons that children so eagerly anticipate camp each summer. Of course safety is always a factor, and children also have parameters at camp for that reason. However, those parameters extend much further at summer camp than they do at home and school. At summer camp, campers are encouraged to climb walls, zip down ropes, run, get dirty and play ball. Even when they express doubt in themselves, they are encouraged with, “Yes, you can.” There is no pressure to be the best at something or to even be good at it, simply to try it. With such encouragement, many campers venture into previously unexplored territory and discover that they can, in fact, do things they previously thought they couldn’t.

The benefits of such encouragement extend beyond the development of courage to try new things. Children become more open to 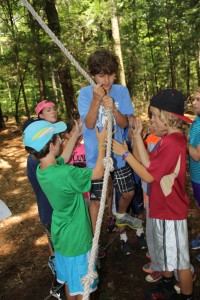 possibilities. They develop the skills to venture out of their comfort zone and examine situations from different angles. A refined sense of creativity helps them attack tasks that previously seemed difficult or even impossible. They learn to comprehend the importance of trying, particularly when the time and place is right. With such perspective, “no” and “yes” become words less associated with ability and more associated with restraint. If they’re talking in the classroom, they can’t understand what the teacher is saying. School is not an environment that makes running in the hallways safe. Things tend to break when they play ball in the house. The clothes they wear when they’re not at camp are just a little nicer than the ones they tend to wear at camp. In contrast, camp is a safe environment for them to talk, laugh, run, play, climb and get messy in ways that are productive. In short, it’s an environment with less restraint in mind. Once children are able to understand the symbiotic relationship between “yes” and “no,” they are better able to accept “no” for what it actually means: It’s not in your best interest.