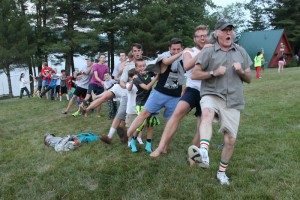 In their book True North, Bill George and Peter Sims challenge readers to examine the qualities and influences that have made them great leaders through a series of motivational chapters complemented by interactive surveys. In the survey that follows the first chapter, readers are asked: “During your early years, which people had the greatest impact on you?” This is a very significant question to anyone who either attended camp as a child or who works at a camp as an adult. 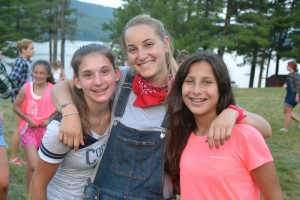 It only takes a single summer to influence a camper for a lifetime, but the majority of campers attend summer camp for seven summers or more, which exponentially increases the chances of camp counselors having a lasting impact on their lives. Add the community environment of camp in which campers and staff live together 24 hours a day, and it’s nearly impossible to imagine that each camper’s life is not greatly impacted by at least one member of the camp staff. Such a conclusion is evident by the amount of former campers who state the influence of former staff members as one of the primary reasons they chose to return to camp as camp counselors themselves.

George and Sims challenge readers to “discern passion through life experience.” Such an intense 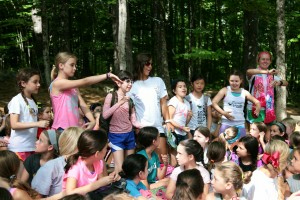 task puts the role of camp counselors into a new perspective. Not only do counselors have the ability to greatly impact a child’s life, but to inspire passion in them through the experiences they provide at camp. This is an interesting concept because it is not one about which most camp staff tend to reflect throughout the summer. Camp is a temporary environment that is structured with a clear beginning, middle, and end. Combine this with the fast pace of camp, thinking tends to steer in the opposite direction.  Yet, many campers –and even counselors– are so influenced by their camp experiences that they take away a passion for camp as well as the traditions and values they are taught there. 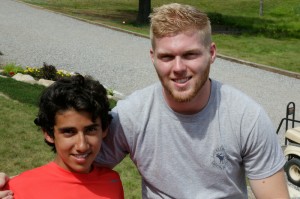 When examined from such a perspective, the role of camp counselors becomes so much more than a summer job, whether a staff member spends one summer or many summers at camp. When counselors pack their bags each summer and head off to camp, they are taking on the tremendous responsibility of inspiring children to become so deeply invested in the camp experience. It’s neither a small nor insignificant challenge. Yet the hurdles of living up to such high expectations is exactly what draws so many camp counselors to their summer camp roles each summer—and what makes them return in subsequent summers. In this regard, the campers have as much influence and inspire as much passion in the counselors as the counselors do to them. The two roles are interdependent.

It’s easy to go through one’s daily life without slowing enough to properly contemplate the potential influence each of us has over others. But when the concept of influence is examined through the perspective of camp, it’s very easy to see how little time is needed to influence someone for a lifetime. There aren’t many places children can go to be surrounded by positive role models that provide them the opportunity to develop relationships on multiple levels.  For most kids, adult mentors are limited to parents, coaches and teachers. There’s one place, however, where children are surrounded by mentors on multiple levels 24/7: summer camp.  Most summer camps have very high staff to camper ratios, which means there is never a shortage of grownups from whom campers can seek guidance and leadership.  Of course, everyone knows that role models are important in the lives of children.  But we simply forget to take the time to consider that having different types of leadership examples is equally crucial, until we’re reminded of this by the campers themselves.

A senior camper at one of America’s Finest Summer Camps recently observed there are so many leaders at camp that you never feel like you have no one to go to when the need arises.  This is very true.  There are coaches to help children improve their skills and reach athletic goals.  There are counselors to provide guidance through daily activities.  There are Head Counselors and Campus Leaders to help out with the bigger, more complicated aspects of camp.  And there are Directors who make it their business to make sure everyone has fun and stays safe.  There is also the myriad of other staff who work in camp offices, kitchens and health centers.  Regardless of which role any of these people fulfill, they’re all working at summer camp for one reason: They have opted to dedicate their summers to making a positive impact on the lives of children, and the campers’ best interests are their first priority.  There aren’t many institutions that can make a similar claim.

As leaders and mentors, camp staff bring a passion to their jobs that anyone who makes a decision to dedicate themselves 24/7 to a job must have in 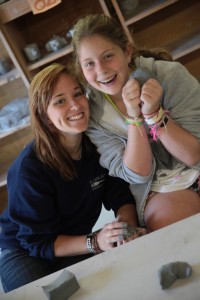 order to be successful.  They voluntarily give up sleep, time with family and free-time in order to be a part of summer camp, and their dedication shows through their interaction with campers.  The relationship is symbiotic.  Campers understand that staff find as much value in the summer camp experience as they do, which develops into a mutual confidence and trust.

Social learning is the psychological concept that places value on the necessity of good role models in the lives of children, which is perhaps why camp is an ideal place for campers to get the most out of being surrounded by many prospective mentors.  Summer camp is somewhat of a microcosm of an ideal society.  It’s a self-contained arena in which people live alongside one another in an environment that is most harmonious when everyone supports the successes of those around them. The absence of everyday competitiveness gives campers the opportunity to take full advantage of the encouragement that comes from everyone around them, including leaders.