Summer camp arts and crafts programs often conjure images of beading lanyards and tie dying. Indeed, crafts are still a large part of camp, but art is becoming equally as important. That is to say that camps are investing more in open ended mediums that encourage campers to use their creativity to create works of their volition as opposed to pre-determined projects of summer camps past.

The difference between art and crafts may not be immediately clear to those who envision a room at summer camp that houses a seemingly unlimited supply of paintbrushes, glitter, paint, markers, glue, construction paper, and beads.  There is a marked difference, however. A recent article featured in Early Childhood News, M.A. and creative arts instructor Anna Reyer outlines the distinctions between art and crafts. Primarily art is open ended creations that evolve from a variety of supplies and minimal guidance. Crafts are pre-scripted projects assembled using specific supplies and guidelines with a finished product that is the same or similar for everyone.  There is something to be said for both the “arts” and the “crafts” of arts and crafts.

Crafts are fun, and many a camper sings the praises of the relaxation and satisfaction derived from a few minutes of down time in which they are given a set of materials and a set of instructions and are left to their own devices. It is an opportunity to be social and engage in casual conversation with other campers and counselors. There is also a sense of satisfaction with the end product, a three-dimensional completed object that the camper created from a group of raw materials.

Then there is art, the benefits of which are becoming increasingly obvious to camp owners and directors. Art projects provide 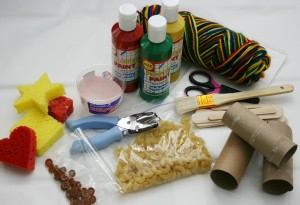 campers with a period of time during the day in which very little, if anything, has been planned for them. It is their time to create as they choose. Whether it is painting or creating a piece of jewelry, it is a sanctioned part of the day that is limited only by their imaginations. Camp in general is a creative space. Through art, it is also an imaginative space. It’s a space in which children are free to unwind and mentally process their feelings. Art is the perfect opportunity for campers to recharge and turn around a day that has been less than perfect.  In that regard, similar things could be said about camp music, theater, and dance programs.

With the importance placed on creativity, fun, and happiness at summer camp, it is natural that summer camps invest big in arts and crafts programs. A memorable summer is more than just the glory of scoring a winning goal or swimming in the lake. Those times in which campers are left to their creative devices and are free to interact or not interact as they please provide crucial balance to the rest of the summer camp experience.