Surely, many of you have seen “The Hunger Games” films or read the books. For those who haven’t – imagine a post-apocalyptic world where 16 citizens are pitted against each other in a battle to the end. Everyone who has heard of “The Hunger Games” has surely thought about their own strategy and technique they would use when participating…but how would campers fare? From archery to camping skills, here are 5 reasons campers would definitely win:

Campers know better than anybody that teamwork increases the odds of success no matter what you’re doing. Being comfortable working on a team and trusting in others to do their part takes guts; whether you’re fighting for your family in the Hunger Games or coming up with an act for the next campfire.

2. They Know How to Hit a Bullseye

What do medieval knights, Hawkeye and summer campers all have in common? That’s right — unbeatable archery skills! Katniss might get a run for her money if she participated in a camp archery competition — some campers are seriously sharp shooters. Knowing how to use a bow and arrow is a rare skill in this day and age, but it’s no mystery to anyone who has gone to camp.

One of the biggest challenges of “The Hunger Games” is making do with what you have, and using creativity to solve problems. Campers use their imaginations all the time; whether in theatre, crafts or in the cabin — creativity is abundant. Needless to say, being resourceful would be no problem for campers.

4. They Know How to Camp Out

As if being on the run and fighting defying odds weren’t enough, the contestants of the Hunger Games also have to survive for days on end in the wilderness — sleeping under the stars, making shelters out of branches, and always planning ahead so they have access to their basic necessities. Luckily there’s no real risk at summer camp, but campers still get to practice the fun side of wilderness survival skills. From learning to start campfires to exploring nature and wildlife, exposure to the skills needed to have a blast in the great outdoors is a huge part of camp life.

5. They’re Loyal to Their Friends 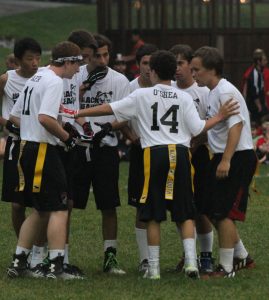 Last but not least, the biggest and best part of camp life: friendship. It’s friendship that saves Katniss at the end of the film (spoiler alert!), and it’s friendship that brings campers back to summer camp year after year. Katniss shows that she’s willing to give up everything for her friends and family. Campers learn that friendship isn’t just about taking — it’s also about giving back, volunteering, and always being ready to help others.