Make so many new friends

Sure, I came to camp expecting to meet a few new people. But I’ve made dozens of friends this 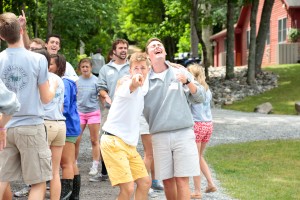 summer from all over the world. I feel closer to some of them than I do to people I’ve known for years. I never imagined that I could grow so close to someone in just a few weeks. I’ve wanted to travel abroad for years, but have been scared of going places where I didn’t know the language or the people. Now I can’t wait to go knowing that my new camp friends are going to be there waiting for me!

Be so enthusiastic about little things

One of the most awesome things about working at summer camp is that even the smallest of details are a big deal. The campers get excited and I can’t help but feel it too. Going to our favorite activity during the day; getting ready for an evening activity; walking into a meal and seeing that it’s my favorite; telling silly knock-knock jokes in our cabin at night; and, in particular, those moments when I really connect with my campers. 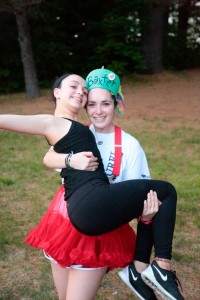 Camp is hard work! I start early in the morning and end late at night. It’s TOTALLY worth it though! I’ve never had so much fun in my life. Sometimes I forget that this is a job and I’m getting paid. So much happens in one day of camp. At night, I lay in bed and try to remember everything that happened during the day just because I don’t want to forget.  I’ve started keeping a journal of my days at camp. This winter, when it’s cold outside and I’m missing camp, I’m going to read it. I’m so glad I decided to work at camp instead of accept an internship. This is SO much better than an office! Now I know I want to spend the rest of my life working with kids.

Talk a camper through something difficult

There are a lot of activities at camp and some of them require courage—especially if you’re a kid. I can’t imagine having the guts to maneuver a ropes course thirty feet in the air when I was ten. I really admire so many of my campers for trying brave and adventurous activities. The best part is being able to give the ones who are a little scared that extra push that they need to take on the adventure. There is nothing more gratifying than a smile and a high-five from a camper who just did something they thought they never could and knowing that I helped them do it.

Live so much in the moment

At camp, it’s simultaneously easy and impossible to forget about how short my time here really is.Every day just flies by, which is also reminder that the end of camp is one day closer. I find myself really wishing that I could slow down time, and I’ve started making an extra effort every day to savor each and every moment of camp. Doing so has made me very conscious of how much time I spend in my everyday life planning and thinking ahead. It’s really nice to keep things in the now. I hope to apply my new focus on living in the moment when I return home at the end of the summer, and stop spending so much time thinking about tomorrow.

Become so attached to my campers

I never imagined that I could become so close to a group of kids. I came to camp to be their leader. But it’s so much more than that. It’s impossible not to be attached after spending so much time with them at activities, at meals, in the cabin and getting to know them one-on-one. It’s blows my mind to think that I’ve become so attuned to their individual personalities in such a short amount of time. The summer isn’t even over, and I already know that I’m going to miss

For the millions of youth who call summer camp home each summer, excitement begins to grow exponentially just after spring break each year. Not only is the end of another school year just around the corner, but the beginning of another camp season is oh so close that campers can practically smell the campfires. A variety of countdowns help them keep track of just how many sleeps are left until they’re back in their bunks or cabins and reunited with camp friends. Oh, of course there are the literal countdowns of exactly how many days, minutes, and hours are left that are featured on many summer camp apps and websites. But kids tend to be a bit more creative than website designers when it comes to countdowns and pre-camp rituals.

Parents may be a bit mystified, for example, when they’re handed a pillowcase, blanket, towel, etc. that campers have conveniently kept out of the laundry basket for the past several months because it “smells like camp.” For campers, this is just the release of one summer as part of the final preparation stages for the next. For parents, it’s a good reason not to send the good pillowcases to camp.

The amount of times the word camp finds its words into a conversation—and sometimes even a single sentence—steadily starts to rise again.  Maybe there is just

something about seeing green, or maybe it’s the warmer days. Whatever the motivating factor, after a graduating dipping off during the coldest winter months, with the arrival of spring comes the re-integration of camp lingo into everyday speech. Parents need not become frustrated, children are usually happy to translate until someone gets around to writing that all important Camp Dictionary for Parents Who Want to Know What Their Campers Are Saying.

Some campers measure the time left until camp by the amount of episodes remaining before the season finale of their favorite television shows and then the number of weeknights they have to endure with nothing on television but reruns to watch until camp starts. Still, others prefer the exam approach and countdown their time until camp by the number of tests remaining in the school year. (Note: Some counselors use both of these approaches as well.)

Clever Apple users countdown with SIRI and hold daily conversations with her about camp. Others like to plan ahead even further into the summer by making out their Visiting Day snack lists, just in case they get too busy to do so after they get to camp. Countdowns are rarely a matter of just plain counting down when it comes to camp. Like camp itself, they’re full of ritual and meaning. They may fight like cats and dogs at home, but attending camp together is special for siblings. Parents may be surprised to learn that at camp, they don’t accuse each of being the one to lose the television remote. Instead, they wave and smile when they pass each other on campus. They don’t fight about taking up each other’s space in the car either. Instead, they make special meeting places to talk about camp—everything they’ve done, new things they’ve tried, new friends they’ve made, and how their sports teams are doing how they got a bullsyeye in archery or are going to be singing a song in the show. Siblings don’t taunt each other when they do something silly at camp. They cheer for them. And, parents, you may be surprised to learn that siblings don’t pretend that each other has an infectious disease that prevents them from ever touching at camp. They readily hug.

As you can see, summer camp may as well be Hogwarts for its ability to transform sibling rivalry into a special relationship. Camp is a distinct set of memories they share apart from their parents. Those camp experiences will always be just theirs, which creates a bond that helps them grow as brothers and sisters as well as individuals. It’s an opportunity that many children who do not attend sleepaway camp don’t get to experience until adulthood. By being able to share a special set of traditions and values, siblings are able to appreciate their relationships at a much earlier age. The thrill of seeing each other experience camp firsts and pass camp milestones also helps them learn to appreciate each other as individuals.

And, let’s face it, we know that seeing your children smiling together in a camp photo after hitting the refresh button a thousand times each day makes it all worthwhile for you. Those smiles are why you put them on the bus or plane each year. They’re why you post the photos to your on Facebook pages and pass them around, accumulating likes. You love hearing them asking each if they remember a certain time at camp or singing the same songs and doing the same cheers. In that respect, being able to send your children to summer camp together is special for you too.