How is it possible that we’re already into our final week of the session? So much has been going on since the last blog:

Moose Bowl was incredible! The Black Bears rolled out to a 20-0 halftime lead, and many thought it was over.  But someone forgot to tell the Rattle Snake CIT captains. Fired up coming out of the half, the Rattlers staged a furious comeback, ending regulation tied at 26…that’s right, OUR FIRST MOOSE BOWL OVERTIME! Actually, it was three overtimes before the Rattle Snakes came out on top, 32-26! 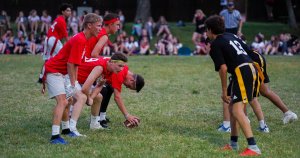 Not to be outdone, last night was our younger thespians time to shine in everyone’s favorite: The Lion King. The time and effort of our campers and staff in the production really paid off as this was one of the finest shows we’ve seen in a long, long time!

Today, the entire camp is off to Funtown USA, where we’ll delight in the rides, the food, the games and (of course) the food!  We know we said food twice, but have you ever tried fried dough?

You might think we’re slowing down, but the action will continue as long as we’re here. We still have: Aladdin, Final Banquet, Final Social, Closing Ceremonies…the list goes on. Our campers may be leaving us in less than a week, but we still have time to make new friends and create new memories! Camp…the way life should be!